Wednesday, August 24, 2016 — (NASHVILLE, Tennessee) – The Euthanasia Deception, a one-hour documentary that explores Belgium’s 15 year experiment with euthanasia, will be available on September 12th. This thought-provoking, emotionally gripping film is a dire warning for the rest of the world, featuring powerful testimonies from Belgium and beyond of those devastated by the false ideology of ‘mercy killing.’

The film exposes three main deceptions of assisted suicide. First, that euthanasia and assisted suicide are a form of compassion. The second is the myth of autonomy: that decisions made between doctor and patient operate in a vacuum. And finally, that government ‘safeguards’ can truly protect the vulnerable.

With expert analysis from both medical and legal professions, The Euthanasia Deception reveals the serious, long-term implications of assisted suicide laws, and proves that all of us become vulnerable when end-of-life care is handed over to lawmakers.

Numerous people whose lives have been affected by euthanasia and assisted suicide are interviewed for the film, including: Professor Tom Mortier, whose depressed mother was euthanized without his knowledge; “Hendrick,” whose grandfather’s death was hastened without request; “James,” who regrets family pressure to euthanize his mother; “Lionel,” who is asked by Belgian strangers why he will not euthanize his severely disabled daughter; “Mark,” an MS survivor, grateful that there was no law allowing him to die by assisted suicide when he was diagnosed; and “Kristina,” a nurse who shares her remorseful experience with assisted death.

The release of The Euthanasia Deception marks the launch of CaringNotKilling.com, a new global resistance movement that utilizes the power of film and social media to combat and resist the acceptance of euthanasia while providing jurisdictions with data to resist its legalization. It is also dedicated to providing support and assistance to through Compassionate Community Care services - to help people who need advice concerning medical treatment issues or need protection from euthanasia and assisted suicide.

The Euthanasia Deception is directed by Kevin Dunn and produced by the Euthanasia Prevention Coalition in association with DunnMedia & Entertainment and supported by thousands of like-minded organizations and individuals throughout the world.

Watch the official trailer at http://vulnerablefilm.com/trailer. 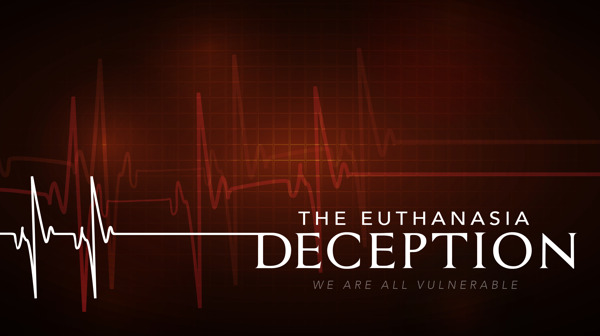