Tuesday, December 4, 2018 — Elvis fans are flocking to Music City this weekend for Nashville Elvis Festival’s new holiday show, CHRISTMAS WITH THE KING: A Tribute to Elvis! The one-night-only concert event for the entire family will take place on Saturday, December 8 at the world famous Nashville Palace. Tickets are on sale now at www.ChristmasWithTheKing.com.

CHRISTMAS WITH THE KING stars COTE DEONATH (2018 Images of the King World Champion) and will be hosted by Nashville Elvis Festival’s TOM BROWN, the longtime host of Graceland’s Elvis Week and their popular Gates of Graceland web series. Sharing the stage will be the incomparable EAS Band, known for their performances all over the world backing tribute artists and giving the feeling and excitement of being at an actual Elvis concert. Popular Elvis personality Jeff Lewis will also make a special appearance…as Santa Claus.

The show will feature 25 of the King's biggest hits and Christmas classics synonymous with Elvis including “Here Comes Santa Claus,” “Winter Wonderland,” "I'll Be Home for Christmas," "Blue Christmas,” "Merry Christmas Baby” and so many more.

“This is the holiday event of the season,” says co-producer Brian Mayes. “Elvis, Santa, Christmas music and more… there’s something for everyone. Bring your friends, bring your family… just don’t miss it!”

For CHRISTMAS WITH THE KING tickets and information, visit www.ChristmasWithTheKing.com. 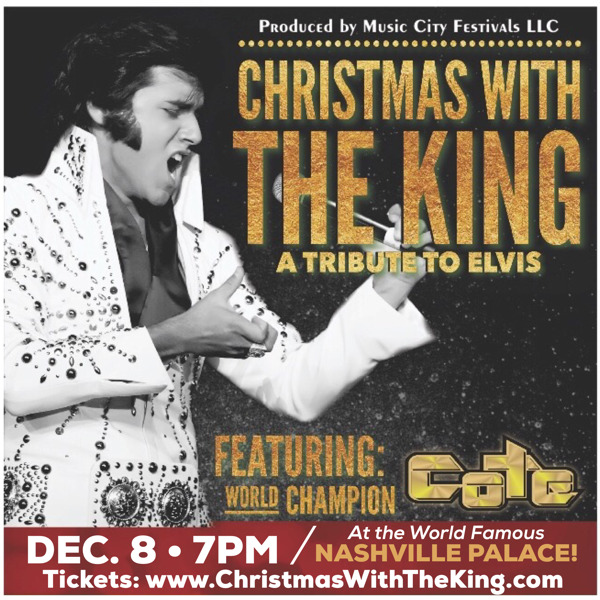